Editor’s note: recent publication of a study about the coming collapse of civilizations has most probably encouraged the author to submit this work for review. Due to its nature, we felt it best to present it to the whole world for a thorough peer review.

A large number of explanations have been proposed to account for the collapse of various historical societies. As Tainter (2014) recently argues, earlier scholars have ascribed collapses to result from elite mismanagement, class conflict, and peasant revolts, while the increased emphasis on environmental issues has inspired modern scholars to suggest that societies have collapsed due to depletion of critical resources, such as soil and forests. Most recently, some studies have suggested that inequality and elite resource consumption leads to societal collapse (Motesharrei et al, in press).

However, these explanations do not focus on what seems to us to be the most pertinent explanation for the collapse of these early societies. It is common knowledge that the earlier societies – examples of which include the Roman Empire, the Mesopotamian civilization, and the Maya civilization – did not possess a modern scientific establishment. As a result, we argue, these societies could not escape their predicaments by developing novel technologies in order to curb elite mismanagement, reduce environmental impacts, or defuse class conflict via widespread Netflix subscriptions.

In particular, environmental literature is well aware of the potential of technology in reducing environmental impacts. From Ehrlich and Holdren (1971), we know that the human impact on the environment can be described by a following equation:

where I stands for Impact, P for Population, A for its Affluence, and T for Technology. Improvements in technological efficiency can reduce resource intensiveness, and therefore reduce the variable T (see also Chertow, 2000). Technological change can even allow us to substitute between different resources, as was the case when whale oil business was outcompeted by mineral oils.

Therefore, it stands to reason that improvements in technology could allow us to postpone or even forestall a societal collapse. While “technology” is somewhat difficult to operationalize, a useful proxy may be found from the share of population with the highest academic degree – the doctorate. As an example, countries ranking highest in PhD graduates per capita (as of 2010, in descending order, Switzerland, Sweden, Germany, Finland, Austria, Denmark) typically score highly in various environmental sustainability and related indicators. It may therefore be surmised that PhD education may help societies forestall a coming collapse.

To test this intuition, we develop a simplified computer model. Following the lead of recent studies, we base this model on the well-known Lotka-Volterra or predator-prey model. The additions to this model are as follows: besides renaming the variables (i.e. P, “population,” and N, “nature”), we add a variable T or “technology” to represent the stock of useful knowledge available for forestalling collapse – e.g. the variety of computer games available for amusing the lower social strata.

The growth of this variable is dictated by the equation

where Q_PhD is a constant denoting the share of PhD students in a population and c is a constant. Increase in T will diminish the environmental impact of the population, or degradation of nature dN_d as follows:

where a is a constant. Finally, we initialize the system with a fixed initial stock of Nature (N_init), and adjust the renewal of natural resources dN_r so that it depends on the current stock of Nature and will not cause the stock of Nature to exceed its original maximum:

where b is a constant. A system dynamics diagram of the model can be found in Figure 1 below. The model has been implemented on NetLogo (Wilensky, 1999), based on a predator-prey model by Wilensky (2005). 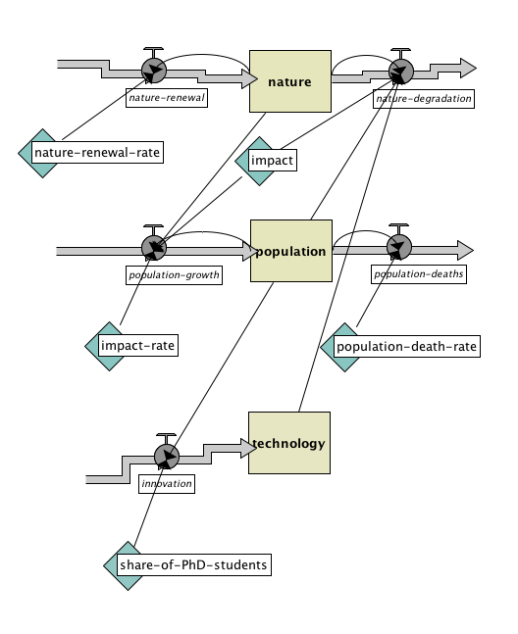 The results of three representative scenarios are shown below. In the Scenario 1, the society chooses not to support PhD students at all (Q_PhD = 0). As can be seen from the Fig. 2, this forces the society into a cycle of growths and collapses, with a downward trend in the population peaks. We posit that such a scenario – lack of support for PhD students – is as likely a cause for the collapse of historical civilizations as any single reason so far suggested. 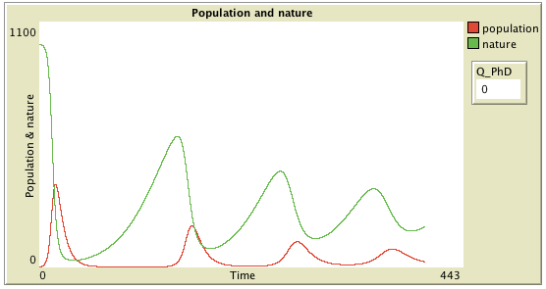 Figure 2: Cyclical collapse of a society that does not support PhD students.

In the Scenario 2, the society chooses to support PhD students rather stingily (Q_PhD = 0.05). Figure 3 shows the results: in this case, the population will suffer from several collapses before stock of technology allows it to transcend the limits of natural stocks.

Figure 3: A cycle of booms and busts, followed by breakout, experienced by a society that offers only limited support to PhD students.

Based on the model described above, we conclude that collapses can occur in a limited system. However, collapse can be avoided with judicious policies. In particular, the model suggests that generous support for PhD students is essential for achieving this goal. We therefore implore policy-makers to adjust policies accordingly; a stipend of 4000 € per month should suffice.

Motesharrei, S., Rivas, J., and Kalnay, E. (forthcoming). Human and Nature Dynamics (HANDY): Modeling Inequality and use of Resources in the Collapse or Sustainability of Societies. In press.

as himself
View all posts by J. M. Korhonen →
This entry was posted in Simulations and tagged collapse, humour, Modeling, Simulations. Bookmark the permalink.