Graphic of the Week: Estimates of world energy consumption to 2100, and renewables generation to 2050 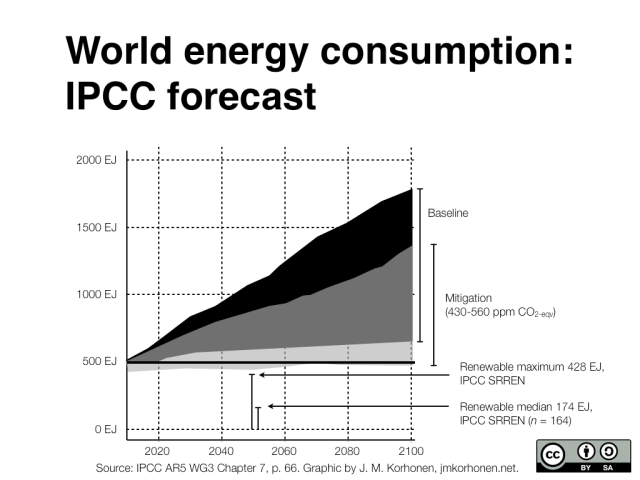 The key problem with renewables-only energy strategy is that it’s a huge gamble much reminiscent of that famous party game, Russian roulette. IF everything goes exceedingly well, we might have a fighting chance of avoiding the worst of climate change; but if something goes wrong, well, it’s goodbye to livable planet.

To gauge the risk, we should look into two things:

Probably the best or, at least, the least controversial sources for both come from the IPCC. In their Assessment Report 5 (AR5, 2014), there is an estimate of world energy consumption in the future. A number of different scenarios were run, and the results are shown above. The black scenarios show “baseline” scenarios, where not much is done to combat climate change; the light grey shows the “mitigation” scenarios, where measures – of varying intensity – are taken to reduce our emissions, and darker grey shows where the two overlap. Thick black line shows 500 exajoules (EJ) per year,  while our current energy use seems to be closer to 600 EJ.

As you can see, there is considerable uncertainty about energy demand in 2050 and in 2100. This is to be expected; forecasting such things is notoriously difficult and uncertain. However, if we are to play this safe, we should probably prepare for a world where energy consumption in 2050 is around 750 exajoules, or even more. If consumption can be kept lower, it’s certainly good news; but there is a danger that it may be higher. For example, it’s uncertain whether our estimates of so-called rebound effect are correct: previous IPCC scenarios have probably underestimated it, and as a result, the low-end scenarios presented here (which rely heavily on energy demand reduction through energy efficiency) may be too optimistic in regard of the capability of energy efficiency measures to drive down final energy use.

What, then, can we expect from renewables? Several environmental organizations, including Greenpeace, have lauded the IPCC’s Special Report on Renewable Energy Sources and Climate Change Mitigation (whew, 2011), or SRREN. They have, for example, claimed it to be the best overall summary of the feasibility of renewables, claiming that it “shows” that entirely renewable future is possible.

One has a sneaking suspicion they might not have read the report beyond its press release. I’ve already noted the problems with these sorts of claims: out of 164 energy scenarios, none can produce what the world uses today – in 2050. Even the most optimistic outliers will fail, unless heroic energy savings are accomplished.

Therefore, for your perusal, I’ve marked the median and maximum estimates from the SRREN report to the graph of estimated energy consumption. As you can see, they’re falling awfully short. Even if the best case scenario from SRREN (done by Greenpeace and its industry lobbyist allies, mind you) gets executed, we’re still in very real danger of failing the climate game. Failure is mathematically certain, if anything else than the most optimistic energy scenario is realized.

The question, therefore, is this: should we gamble literally everything on the off chance that the most optimistic renewable energy proposal has it right, and that the most optimistic energy demand estimate is also correct? Or should a responsible policy-maker diversify the options and include the most important single source of low-carbon energy we have in the energy mix?

As a voter and citizen, you decide.

as himself
View all posts by J. M. Korhonen →
This entry was posted in Economy and the Environment, Energy, Infographics, Nuclear energy & weapons and tagged Energy, Graphic of the week, Infographics, IPCC, Nuclear, Renewables, SRREN. Bookmark the permalink.

3 Responses to Graphic of the Week: Estimates of world energy consumption to 2100, and renewables generation to 2050