Hey Greenpeace, could you find us Finns a warm place to live in? 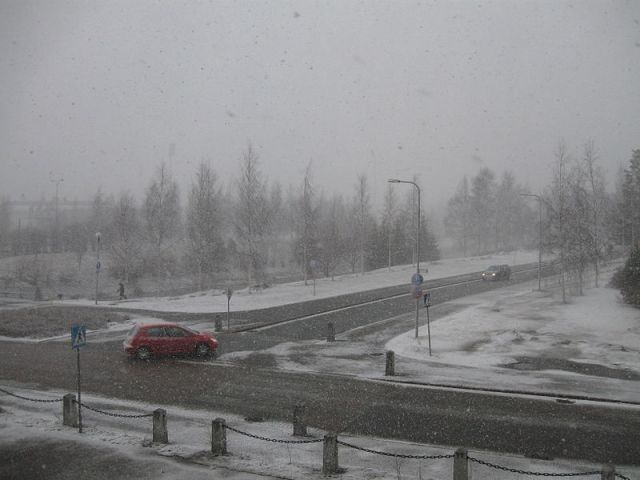 A recent Greenpeace news release leads to an inescapable conclusion: that us Finns need to be evacuated immediately, because radiation hazards of living in Finland exceed those encountered in Fukushima evacuation zones. I therefore humbly ask Greenpeace to find a place for 5.5 million Finns, or at the very least for those 549 000 of us who now have to live in a radiated wasteland where annual radiation doses are at least two times higher than what Greenpeace deems “emergency radiological situation” and “an unacceptable radiation risk” in Japan. If possible, could we also find a place that’s warm and without slush?

According to Greenpeace’s press release, “2017/02/21 Greenpeace exposes high radiation risks in Fukushima village as government prepares to lift evacuation order”, radiation levels measured in Iitate village would equate to an annual dose of 2.5 millisieverts per year (mSv/a), and levels as high as 10.4 mSv/a have been measured indoors. Since millisieverts are a measure of radiation danger that already accounts for the differences between different sources of radiation and for the differences in exposure pathways (e.g. internal or external), we can use these measurements to compare directly the risks of living in Iitate to risks of living in Finland. The comparison is simple: for the purposes of radiation hazard, higher millisievert count means greater risk.

According to Finnish estimates, the 5.5 million people living in Finland are at a greater risk than inhabitants of Iitate, receiving on average 3.2 millisieverts per year. 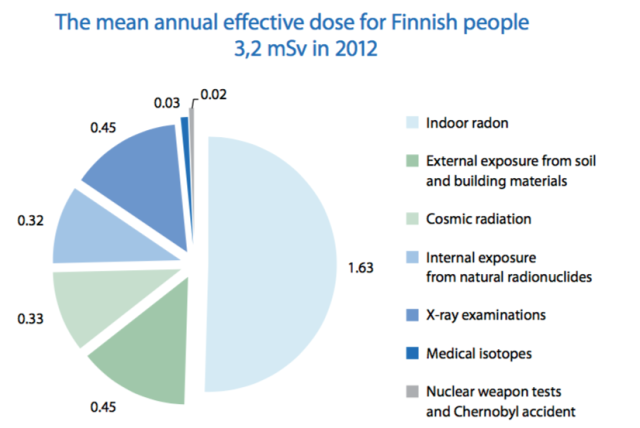 But this is not the whole truth, oh no! In many places in Finland, actual radiation doses are far higher than that. The ice ages scraped our soil down to bedrock, and bedrock contains considerable quantities of uranium. As it decays, one of the decay products is an odorless, invisible and radioactive gas known as radon. With little soil above to hold it, radon tends to rise into air and collect within our dwellings. As the pie chart above shows, radon and its decay products are a major factor in the radiation dose of an average Finn, but radon exposures can vary widely, from almost zero to as high as 340 (yes, three hundred and fourty) millisieverts per year (Muikku et al. 2014, p. 12).

According to measurements conducted by the Finnish Radiation Safety Authority (STUK), there are about 549 000 Finns who receive at least 5 millisieverts per year from radon and other sources. Of those, perhaps 70 000 receive annual doses that exceed the highest doses Greenpeace managed to measure at Iitate (10.4 mSv/a) (Muikku et al. 2014, p. 15). (Note: it is unclear whether radon might in fact account for the high indoors radiation doses Greenpeace measured in Iitate. It is well known from Finland and other areas with high radon concentrations that without very good basement ventilation, radon can easily collect in houses and result to very high dose rates.)

Even though extensive studies have failed to find any clear links between these dose rates and incidence of health problems (a link likely exists, but is so weak that clear connection cannot be established), it should be by now clear to anyone that if anyone deserves an evacuation because of radiation hazards, it is us Finns. (See also the picture at the top of this post.)

The Fukushima disaster was a needless tragedy that sundered apart entire communities. It is despicable for any organization to continue to prolong this tragedy and exploit people’s understandable fears for the purposes of propagating its outdated, probably disastrous energy policy that puts opposition to nuclear power at front and center even when evidence of the dangers of runaway climate change becomes clearer by day. It is especially despicable to use utterly misleading propaganda like Greenpeace currently does – to solicit donations.

as himself
View all posts by J. M. Korhonen →
This entry was posted in Nuclear energy & weapons, What they aren't telling you about nuclear power and tagged Environment, Finland, Fukushima, Greenpeace, Propaganda, Radiation. Bookmark the permalink.

43 Responses to Hey Greenpeace, could you find us Finns a warm place to live in?